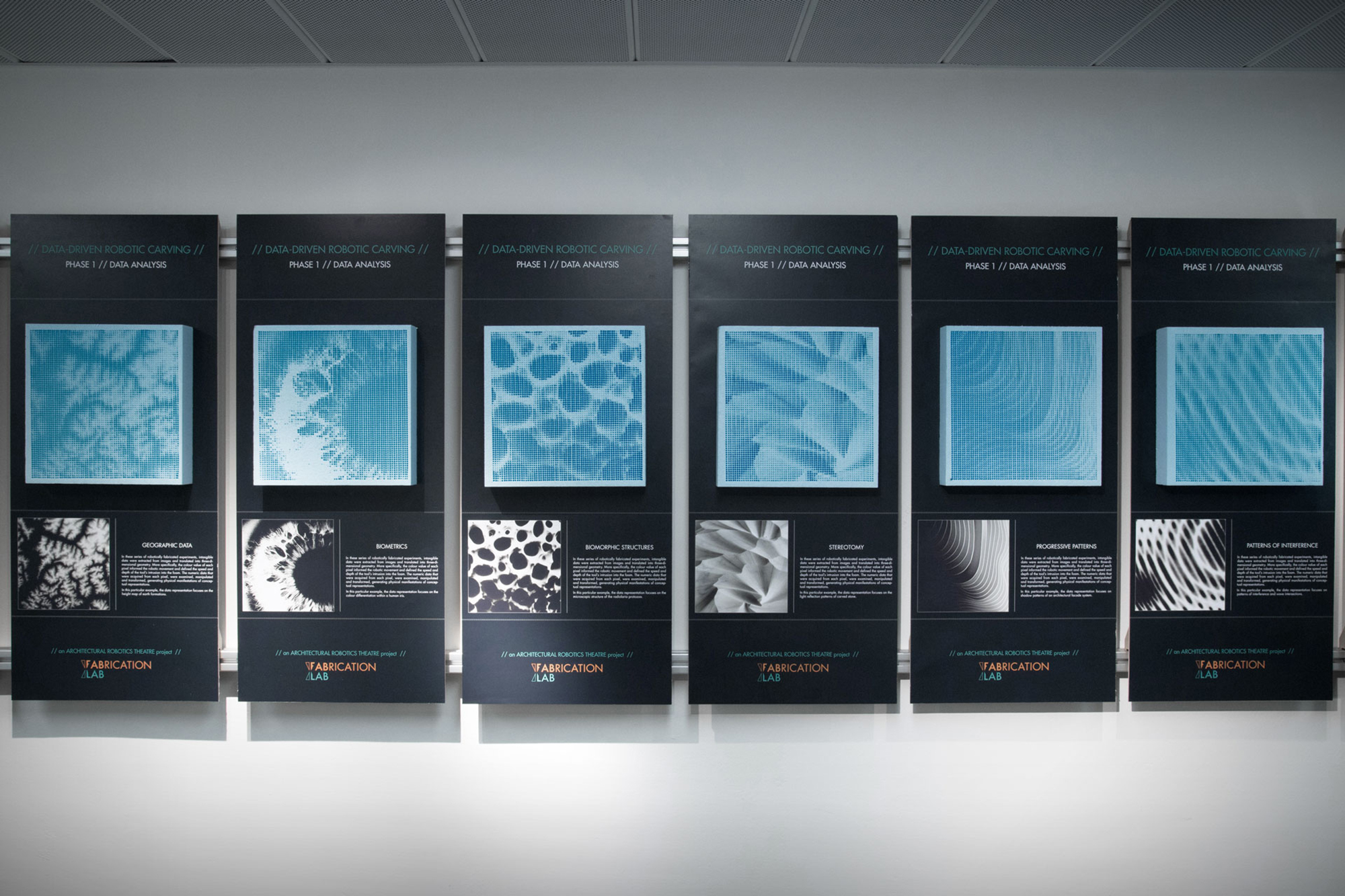 Data-driven Robotic Carving (DRC) is a novel fabrication technique where intangible data get translated into robotic motion parameters that drive the kinematic solver of a 6-axis industrial robotic arm, resulting in the physical extraction of material and the generation of complex geometrical formations. In Data-driven Robotic Carving no prior complex description of a pre-generated morphology is required; instead, a bottom-up approach is applied, where the geometrical result is the direct outcome of the fabrication process and the robot’s possibilities and constraints. Robotic fabrication parameters and material properties inform directly the design outcome, creating a feedback loop for the design iterations.

The workshop at the Advances in Architectural Geometry conference in September 2018 will focus on the structural analysis and topology optimization of shell structures and the generation of complex Architectural Geometry through the interpretation and translation of structural data into robotic motion. Aim of the workshop is to form a collaborative ‘design to fabrication’ exercise and investigate the generation of complex, materially optimized panels through data-driven robotic fabrication.

The investigation will extend the ongoing research on topologically optimized shell structures and the fabrication of those through Data-driven Robotic Carving technology. DRC offers expanded geometric and fabrication possibilities, as it explores new ways to transform abstract, intangible data, such as material distribution or density, into actual form. It manifests an alternative to additive manufacturing, proposing a more time and cost-efficient panel fabrication method.

Participants will initially investigate ways of structurally analysing and topologically optimising shell structures. In continuation, the numeric data that will be acquired will get examined and manipulated, in order to get transformed into robotic motion parameters. Through feedback from the robotic programming, a taxonomy of forms that can be constructed will be specified. Finally, the design iterations produced will be robotically fabricated as full-scale styrofoam panels, generating physical manifestations of conceptual representations. The expected outcome of the workshop is a full-scale styrofoam prototype, demonstrating the complex geometrical panel forms which derive from simple sets of robotic motion rules. The installation will be augmented through light projection, facilitating the visualisation of the intangible set of instructions that led to the material extraction.

The Data-driven Robotic Carving workshop at AAG 2018 will approach Architectural Geometry as the result of the intersection of architectural design, engineering and robotic manufacturing. What in most fabrication techniques is tackled as an explicitly controlled process, where data inform the generation of geometry which then has to be fabricated; in DRC becomes a bottom-up, generative process, where the final geometrical output is directly linked to how data is manipulated and interpreted by the robot. Previous research on Data-driven Robotic Carving has been developed in the Robotics Lab of the University of Westminster, culminating in a robotically fabricated installation – The Cloud – in December 2017. THE CLOUD is the outcome of a research project investigating new fabrication techniques derived from the use of industrial robotic arms. The novel process of data-driven robotic carving was explored, where the calibration of the system was achieved through a conversation between the properties of the selected material and the robotic fabrication process. Employing an iterative approach to the design, form-finding became the outcome of constant observation and feedback produced throughout the fabrication process. THE CLOUD was part of the Architectural Robotics Theatre (A.R.T.) series of projects. A.R.T. is an action research project aimed at developing, analysing and improving the role of industrial robotic arms on the teaching and practice of Architecture, through a series of experimental, design-led interventions, workshops and performances. 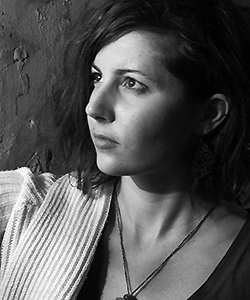 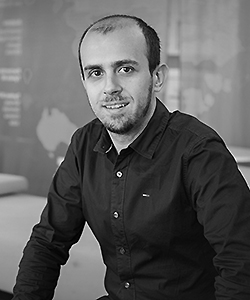 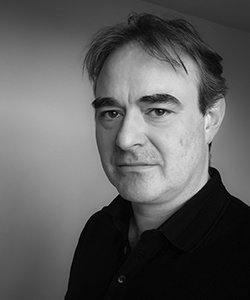 Eva Magnisali is an architect engineer, researcher and educator, currently working as a Research Associate at the Fabrication Lab of the University of Westminster, where she coordinates the Robotic Lab of the faculty of Architecture and Built Environment. Eva has taught a series of computational and robotic fabrication workshops at the University of Westminster and has been a tutor at the Architectural Association since 2015, when she earned a Master of Architecture and Urbanism from the Design Research Laboratory master programme. Additionally, Eva holds a Master of Architecture and Engineering with honours from the National Technical University of Athens. Her research investigates the integration of design and robotic fabrication, currently focusing on robotic manufacturing of topologically optimized shell structures, using composite materials. As an architect, Eva has worked at Foster + Partners, where she developed computational design tools for the digital representation and fabrication of complex facades. She has also collaborated with renown practices, such as AKT II and Robofold. Eva taught a workshop in AAG 2014, in collaboration with Zaha Hadid Architects and Robofold. In parallel, Eva has organised several international conferences and she has given lectures and presented her work internationally.

Ed Tibuzzi {Bachelor’s degree in Civil Engineering} is a designer and researcher based in London(UK). He is currently an associate at AKTII, where he leads its Computational Design team (p.art®). He graduated from the Civil Engineering Faculty or Rome2 University in 2005 presenting a project of structural restoration of a 15th century Roman Palazzo (Palazzetto Cenci). Subsequently to his degree he moved to London where he developed a profound interest for parametric and computational design. Uncertainty modeling, quantification and mitigation, multi-scale modeling of structures and multidisciplinary design optimization are part of his daily research. In 2007 he joined Adams Kara Taylor (now AKTII) and shortly after became member of its parametric applied research unit (p.art®). During his work at AKTII, he has completed various projects, in particular the UK Pavilion (Shanghai 2010 Expo’s), BMW Pavilion and Coca-Cola Beat-box (London 2012 Olympic Park), Akihisa Hirata’s Tangling exhibition (The architecture Foundation,2012), Birmingham New Street Station Re-development (Birmingham 2009-2013), Bloomberg’s London Headquarter (2012-now), 2016 Serpentine Pavillion to name a few. He collaborated with KTH University in Stockholm, UCL and RCA in London and Tor Vergata University in Rome, running various lectures and workshops. He co-led a cluster in 2013 Smart Geometry, and co-authored the book :Design Engineering RE-Focused published in 2016 by Wiley

David Scott is a Principal Lecturer in the Department of Architecture and Director of the Fabrication Lab at the University of Westminster. He trained in Architecture at Westminster and the Bartlett, UCL, before working for several years in architectural practice in London. Having returned to teach at the Bartlett and subsequently Westminster, he lead the 5-year transformation of the faculty’s traditional workshops into an extensive Fabrication Lab. He is now developing the research and teaching agenda for the Lab, including building new partnerships with professional practice and industry. In addition to his interests in digital design and fabrication, David draws on a diverse range of experience having previously qualified and worked as a Research Psychologist. He was a lecturer at UCL and subsequently a research project leader for a blue-chip corporation. He retains a long-standing interest in the work of Michel Foucault, and his research in the Lab is informed by a historicist understanding of how new technologies and especially computational design and robotic fabrication is transforming the discourse, material practice and potentialities of architecture. David is also Principal Investigator for the Architectural Robotics Theatre (A.R.T.) research project and founder of of FAB FEST, the annual international fabricationcompetition and public festival.